President Abraham Lincoln's first proclamation, calling for troops to suppress the rebellion of the secessionist states and "maintain the existence of our National Union," issued two days after the fall of Fort Sumter. A document of the greatest consequence for the nation, this momentous proclamation was also an important antecedent of the Gettysburg Address, embodying Lincoln's first official articulation of a central theme of his presidency and the war effort - the "perpetuity of popular government." This Department of State circular is the only separate, contemporary printing and - for an officially printed state paper of such profound significance - is exceedingly rare; the only known copies are the present one and the copy in the National Archives.

On Sunday morning, April 14, 1861, President Lincoln, who had been in office a mere six weeks, received news that Fort Sumter had fallen and met with his cabinet and military advisers to address the crisis. Later that day he sat down to formulate his response: a proclamation calling 75,000 state militiamen into federal service. He found his legal precedent for doing so in the Militia Act of 1795, passed in the wake of the Whiskey Rebellion:

"...whenever the laws of the United States shall be opposed, or thereof obstructed, in any state, by combinations too powerful to be suppressed by the ordinary course of judicial proceedings, or by the powers vested in the marshals by this act, it shall be lawful for the president of the United States to call forth the militia of such state, or of any other state or states, as may be necessary to suppress such combinations, and to cause the laws to be duly executed...."

Lincoln wrote the principles and much of the language of this clause into the opening paragraphs of his Proclamation:

"Whereas the laws of the United States have been, for some time past, and now are, opposed, and the execution thereof obstructed, in the States of South Carolina, Georgia, Alabama, Florida, Mississippi, Louisiana, and Texas, by combinations too powerful to be suppressed by the ordinary course of judicial proceedings, or by the powers vested in the Marshals by law: Now, therefore, I, Abraham Lincoln, President of the United States, in virtue of the power in me vested by the Constitution and the laws, have thought fit to call forth, and hereby do call forth, the militia of several States of the union, to the aggregate number of seventy-five thousand, in order to suppress said combinations, and to cause the laws to be duly executed."

Had Lincoln indicated that he meant only to defend Washington, the consequences of the Proclamation might have been very different. Instead, he spoke of suppression and deemed "it proper to say that the first service assigned to the forces hereby called forth will probably be to repossess the forts, places and property which have been seized from the Union...," although he added that "the utmost care will be observed...to avoid any devastation, any destruction of or interference with property, or any disturbance of peaceful citizens in any part of the country." Either way, this was all too much for other southern states, where it was interpreted as a declaration of war. Secessionists were incensed and southern Unionists felt betrayed. Within two days Virginia seceded, and Arkansas, Tennessee, and North Carolina soon followed.

Lincoln appealed "to all loyal citizens to favor, facilitate, and aid this effort to maintain the honor, the integrity, and the existence of our National Union, and the perpetuity of popular Government...." Lincoln calls on Senator and Representatives to assemble to "consider and determine such measures as, in their wisdom, the public safety and interest may seem to demand." He chose the resonant date of July 4 for the Congress to assemble in this extraordinary session.

In the North the result was a nearly unanimous outpouring of patriotism. The President's political opponent, Stephen Douglas, rose to the occasion and declared his support, urging others to rally to the Union cause, ensuring unanimity across the political spectrum. Lincoln's theme of union and democratic government had found its mark, and would later receive its highest expression in the final passage of the Gettysburg Address: "that government of the people, by the people, for the people, shall not perish from the earth."

While the text of this proclamation was widely printed in newspapers, this State Department circular was the only official separate printing, and on the evidence of this copy - recently found among the papers of U.S. Representative, Senator, and Civil War general Gilman Marston of New Hampshire - was circulated to members of Congress, among others. An inscription, most likely in Marston's hand, appears on the verso, reading simply: "President's Proclamation."

Not recorded in OCLC, Monaghan, Stern, or the online catalogue of the Lincoln Library. The Library of Congress, which owns Lincoln's manuscript draft of the proclamation, does not have a copy, as confirmed through consultation with Clark Evans, the resident Lincoln expert at the Library of Congress. We know of only two other copies, one in the collections of the National Archives and the other in private hands.

A truly rare and highly consequential proclamation, marking the official beginning of the Civil War. 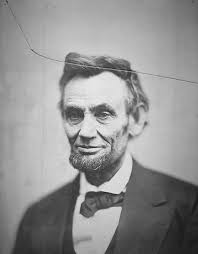