A bold steamroller of an unsigned letter fragment from Kerouac to poet Philip Whalen soon after he has completed writing the novel Visions of Gerard (which would not be published until 1963).

“‘screams of passion, rites of spring […]
‘Blossoms fluttered from the trees and crossed contrarious Gerard-o’s window pane, he would not balmy truck with Spring and swell with it, but wasted like sacrosanct and ill-timed Autumn, out of his element — like my father exactly 20 years later, he was dying during the Resurrection and the Life Renewed.’
“Would you say that these were the words of an irresponsible goof? […] you hold certain hidden reservations back from me concerning me. . . . I think you think I’m carless, blank, Sure I’m proud, and why not, I can outwrite any sonofabitch in the world today. And why not? I’m the only one who’s put in any time in it. […] I tried to put down writing, I cant — I go on, roll steamroller, blank? […] Bah. Come on, Whalen, put up yr. dukes and fight. Satori!”

Kerouac tells Whalen to avoid “Miller, or Hemingway . . . read the real writers read Blazac, Han Shan, Shakespeare, Dostoevsky (not Whitman), Blake […] Can Louis MacNiece and Gabriel Hatter and take up Md Mohammed. Haiku is nice but it’s small, I mean there are a million haikus in one good prose work and a million haikus in Emily Dickinson too […]
“This is my last long letter, Phil, after this let’s confine ourselves to little telegrammy postcards”. He asks Whalen about Mount Baker and the Desolation lookout job, and inquires about Gary Snyder. Kerouac closes with mention that he is sneding Allen Ginsberg a card.

A choice Kerouac epic in a single typewritten page. 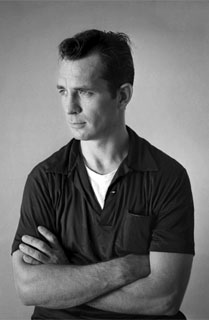